At Mungo we have a wide range of products made from pure flax linen taking advantage of the qualities of this timeless fibre.

A few interesting facts about linen and why we should all be sleeping on it.

One of the world’s oldest fabrics, linen is woven from the fibers of the flax plant and is a completely natural resource. No part of the flax plant is wasted; the left over linseeds, oil, straw and fiber are used in everything from lino and soap to cattle feed and paper. Few products are so efficiently used as flax.

Due to its one-time common use to make fine fabric, “linens” became the generic term for sheets and pillowcases. The characteristic most often associated with linen yarn is the presence of “slubs”, or small knots that occur randomly along its length. The finest linen has a very consistent diameter with no slubs. 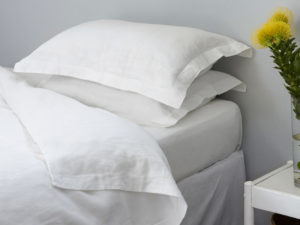 The standard measure of linen yarn is the Lea, this refers to the diameter of individual threads. A yarn having a size of 1 lea will be used for ropes and sacking. The fine yarns used in handkerchiefs and incredibly delicate fabrics might be 40 Lea. At Mungo we use 40 Lea to give you both beauty and longevity.

Linen is one of the world’s oldest fabrics. Mummies have been found wrapped in linen shrouds dating as far back as 4500 B.C.

Flax yarns and fabrics increase about 20% in strength on wetting. Linen is also therefore stronger when being washed, resulting in greater longevity than, for example, cotton. It also has low elasticity, does not stretch, so will keep its shape.

When linen fabrics are in contact with the skin, the nodes along the length of the fibre absorb perspiration, then swell and release the moisture to the outside air, thus creating a fabric self-cooled by evaporation. As a result linen is a popular choice for bedding particularly in hot climates.

Linen is capable of rapidly absorbing and yielding moisture. It evaporates water as quickly as the pond surface. Linen can absorb up to 20% of its own weight in moisture while still feeling dry to the touch. That explains why linen cloth always feels fresh and cool.

According to medical studies conducted in Japan, bed-ridden patients do not develop bedsores where linen bed sheets are used. Wearing linen clothes helps to get rid of some skin diseases – from common rash to chronic eczemas.

Linen is effective in dealing with inflammatory conditions, reducing fever and regulating air ventilation, and is also helpful in the treatment of some neurological ailments.

Linen is renowned for its spectacular durability and long life. The tensile strength of linen thread is twice as high as that of cotton and three times that of wool. Silica present in the flax fiber protects linen against rotting – the mummies of Egyptian Pharaohs preserved to the present day are wrapped in the finest linen cloth.